this is iris from lolirock and I’m making this cosplay for jess for Halloween. I’ve already bought the fabric and have started sewing it and am like 50% done with the main body.

I’m recording me making the outfit too so I can make it into a YouTube video so keep an eye out for that!

Switched to this cosplay, have the jewelry, pants, and have the boots saved on amazon, and I got the fabric for the jacket today. I already have the pattern so now all I have to do is sew!

I got the stockings, jewlery, found the jacket for about $20 and the boots for about $30 and I plan to buy those this weekend. All that’s left after that is me making the dress and the bracers!

The bracers I can just make from seeing in this picture but the dress i’ll need to buy a pattern for. Luckily Hancock fabrics is having liquidation sales so I am deffinitly going to take advantage of this this weekend.

So I’ve deffinitly dine nothing for my goals for the past 2 months. I’ve been SUPER busy what with my sisters surgery and helping grandma move to iowa. Deffinitly been selling a lot of stuff on ebay though and since female thor will probably take a while yet, I decided to do a mostly bought scarlet witch outfit so I can get out there and practice being in character. The only things I’ll be making would be the dress and the cuffs, everything else (jacket, stockings, jewlery, boots) will be bought in store and modified for my needs. I found this awesome new app called cosplanner and it helps with organizing what you want for a cosplay, what you need to buy, what you need to make, and just anything else you need to do and it deffinitly helped with speeding up the process of getting the scarlet witch outfit done very quickly. 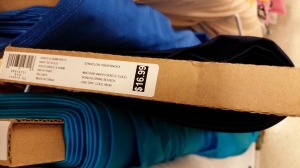 Got a 60% off coupon from joanns so I finally went and got my fabric over the weekend.

At the last iowa cosplay meeting I asked some one who is good at modifying templates which one I should use and she had the good idea of using d instead of g for better lines. Hopefully I can get some more help this thurseday and make some really great progress!

so i got the black tank top for the bottom “layer” of my lady thor costume yesterday. it fits great and looks really easy to work with if I have to sew anything to it. I also found how to make thor’s hammer using a template from instructables.com

looks super fun and really accurate. only catch is it requires power tools and after some “instances” with power tools years ago the guys (dad and robert) don’t let me use them as they fear for my safety, but I can usually get them to help me so yay!

So like I’ve said before I’m going to use just a normal black tank top for the black “base” of the costume and for the blue “vest” part that would be the next layer, I think I found the pattern I want to use.

I was thinking of using C and instead of 3 tier sleeve, just use 1 and then all I have to do is add the waist strap and add the trailing in the back. I’m hoping this will work well and I already have this pattern. Now I just need to get money from my next paycheck and I’ll be set!

Over the weekend I went to Jo-Ann Fabrics and Crafts (Joann’s), in Ames and Ankeny, to look for the new “cosplay fabrics” by YaYa Han that were supposed to come out. Neither store had them, but the Ankeny store said I may find them in Clive, so since I work in Clive I’ll be looking after work and will post an update then. I originally wanted to see them because they were fabrics specifically for cosplayers and to look for fabrics for my 3 cosplays that I want to do this year. I’d been hearing a lot about how bad these fabrics were and about how over priced they are, and that YaYa turned into a sell out, which I really don’t want to believe cause the SYFY cosplay show is what got me the confidence to go ahead and try to make cosplay for myself. Being about to see that really professional cosplayers don’t always know everything and have to google or youtube tutorial stuff they don’t know just like I do really did give me the confidence to say “Hey, they do it just like you do. Get off your ass and get to work!” So I bought a crap ton of patterns and started making outfits for my sister first (mostly cause she’s adorable and I was making regular clothes for her anyway since she was a baby, it was like having my own dress up doll!).

Anyway while I was out, even though I didn’t find what I was looking for I still found some awesome fabric for the cosplay that I want to do.

ok for this one I already know I’m just going to buy the black tank top or just use one I already have. There really is no reason for me to make one as they can easily and much more cheaply be bought for $5 or less, and are more likely to not fall apart while I’m wearing it. But the blue fabric (the middle top on the first image) that is going over the black tank top I think I found. It’s this fairly stretchy kinda spandexy (actually I think it is spandex fabric lolz) seems like it would be a really good choice since the tank top is kinda stretchy and since I have medium-large boobs, I’ll need the stretch. I’ll have to wait till I get another 50% off coupon and money till I can buy it, but I think this is a really good first step. I also really like the flow and it didn’t feel like it bunched a lot so I think a red of this fabric would do really well for the cape too.

ok for the coat I was thinking of a suede and I found this awesome apollstery fabric of blue suede and it’s perfect feeling, and I think it would work really well. 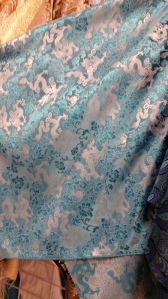 So far the only cosplay I’ve done has been for my little sister (currently 10). The very first I did was a “twilight sparkle” outfit for Halloween and I’ve done Halloween costumes every year since for her. It’s pretty much expected now.

But with the practice I’ve done with her and that I keep getting better. I feel ready to finally start making cosplay for myself! The themes I want to try to do are… 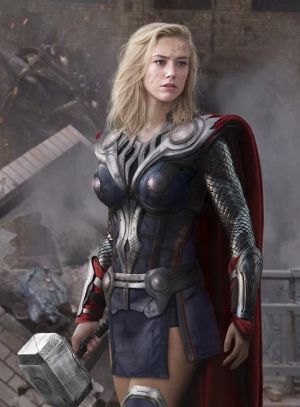 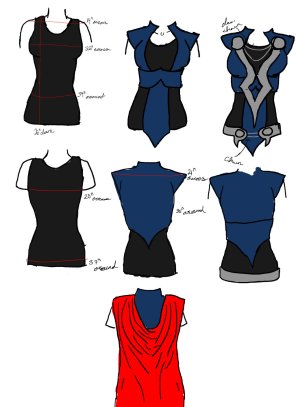